The British Columbia Real Estate Association (BCREA) is calling on the federal government to revisit the B-20 stress test so that more BC families can achieve their dream of home-ownership. Mortgage lending rules, known as the B-20 stress test, have eroded housing affordability by reducing the purchasing power of families by as much as 20 per cent. Introduced last year, the stress test forces even the most credit-worthy borrowers with large down payments to qualify at an interest rate that is two percentage points above the rate they negotiate with their bank.

“We would like to see a review and reconsideration of the current mortgage underwriting ‘stress test,’ as well as a return to 30-year amortizations for federally insured mortgages,” says BCREA chief executive officer Darlene Hyde. “These rules must be changed now before BC families are left further behind.”

The stress test has caused a sharp decline in the attainability of home-ownership in Canada. Since its implementation, home sales have declined 18 per cent across the country. Canada’s largest urban centres, where lack of affordability was especially acute before the new rules came into effect, have been hardest hit.

Home sales have declined nearly 25 per cent in Toronto and more than 45 per cent in Vancouver over the same period.

“The B-20 stress test is also having a negative impact on homeowner equity, family spending and the housing stock itself,” adds Hyde. “There’s a knock-on effect to the overall economy as families who are worried about declining home equity cut back on retail spending, home renovations and other products and services.” 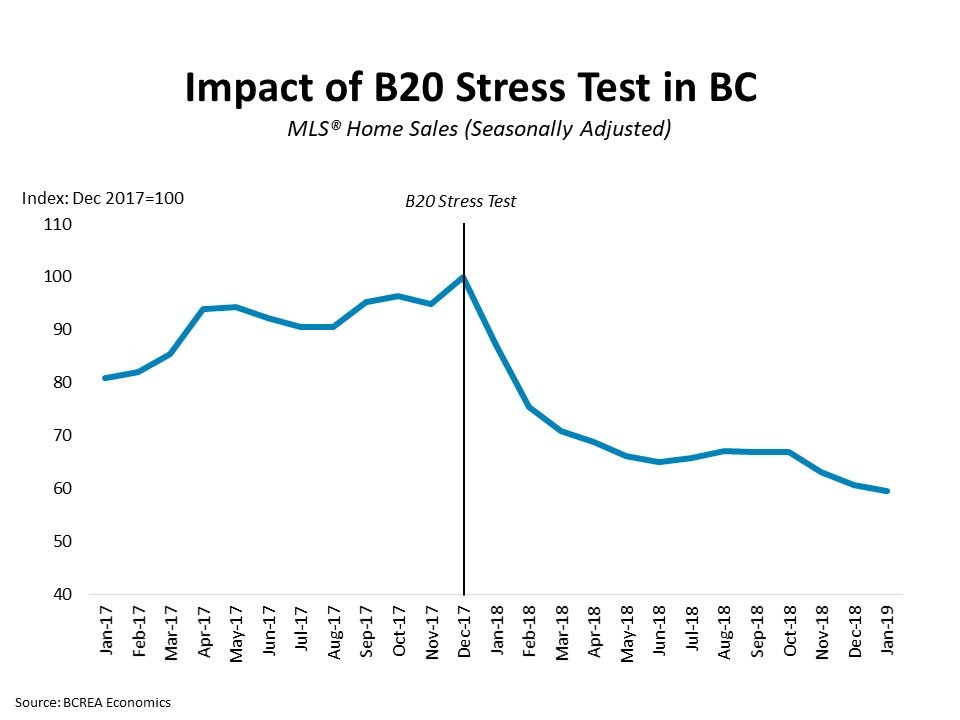 A sharp decline in housing demand also causes home builders to pull back on production, arguably when it’s needed most, leading to slower growth of the housing stock and yet another supply crunch coupled with upward pressure on home prices down the road. Accordingly, the Canadian Home Builders’ Association has expressed similar concerns regarding the B-20 stress test, and the Canadian Real Estate Association and Toronto Real Estate Board have recently made similar appeals.
When families are locked out of the housing market by the strictest of mortgage rules, even the BC government treasury is affected. The sharp decline in home sales caused by the B-20 stress test has cost the government $400 million in lost Property Transfer Tax revenues alone, money that could have been used for health care, education and affordable housing.
Copyright BCREA – Reprinted with permission