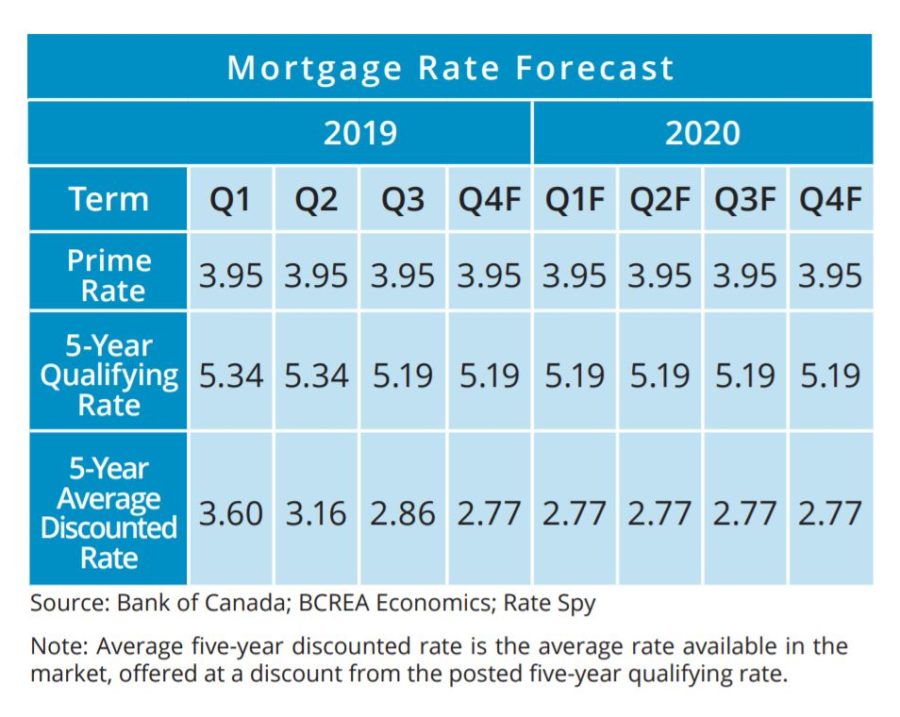 Canadian mortgage rates continued to decline in the third quarter as rising trade tensions between the United States and China fed growing fears of a global economic slowdown. Those fears pulled long-term Canadian interest rates low enough to invert the Canadian yield curve, a frequent— though not infallible—precursor to recession.

As bond yields fell, the average 5-year contract rate offered by Canadian lenders declined to an average of 2.86 percent, with 5-year fixed rates as low as 2.25 percent currently available. The 5-year insured rate, however, which given the decline in contract rates is currently the stress test rate for both insured and uninsured borrowers, has remained stubbornly unflinching. As a result, borrowers subject to the B20 stress test are now forced to qualify at a risk buffer (stress test rate minus contract rate) of approximately 250 basis points.

The unpredictability of US trade policy makes the future direction of interest rates cloudier than usual. Indeed, current Canadian economic conditions—a historically low unemployment rate and inflation near its 2 percent target— would not normally engender speculation of looser monetary policy. However, when the outlook for the global economy can change with a Tweet, markets trade on fear rather than data.

While interest rates have recently bounced off their lows, global risk remains tilted to the downside. Our baseline forecast is for 5-year fixed rates to remain relatively constant over the next year at 2.77 per cent. As for the 5-year qualifying rate for insured mortgages, its lack of variation remains a puzzle. While underlying 5-year bond yields were once a reliable guide to movements in the qualifying rate, that relationship appears to have changed. The statistical relationship between 5-year fixed rates and the 5-year government bond yield has deteriorated since the financial crisis of 2008 and even more so with the introduction of tighter qualifying rules for insured borrowers in 2016.  Our 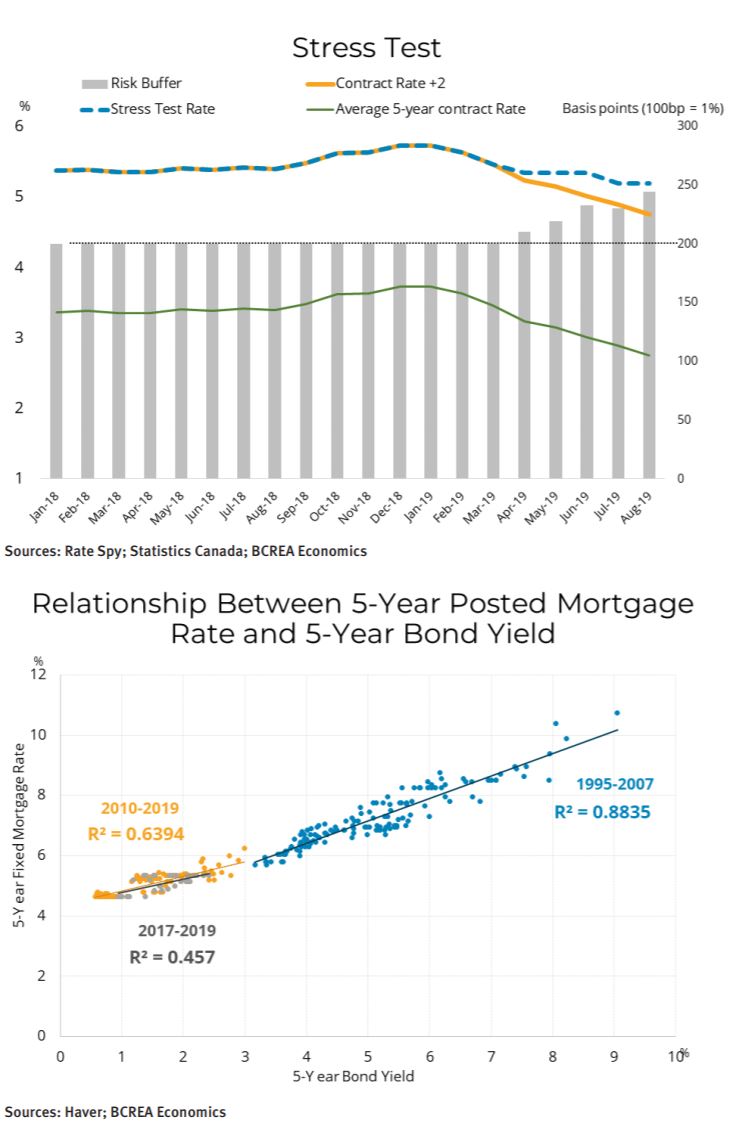 base case is therefore for the qualifying rate to remain unchanged over the next year.

After faltering for two quarters, Canadian economic growth appeared robust in the second quarter, registering a two-year high of 3.7 percent. However, the details underlying the near 4 percent rise in real GDP were less optimistic. Business investment contracted nearly 7 percent at an annualized rate, driven by a 16 percent decline in spending on non-residential structures, and machinery and equipment. Second-quarter household spending slowed to just 0.5 percent, the lowest reading since the first quarter of 2015. A 13 percent jump in exports following nearly a year of flat or even negative quarters was the main driver of growth, a feat which is unlikely to be repeated. Given those details, we expect that growth will moderate to between 1.5 and 2 percent in the second half of 2019.

We expect the Canadian economy will post trend growth of about 1.8 percent in 2020, though significant downside risks remain due to elevated trade tensions and their consequent impact on exports and investment. 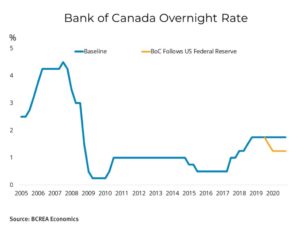 The Bank of Canada has remained on hold for much of the past year, opting to not follow the majority of other global central banks in lowering its policy rate. However, it has left the door open to lowering rates should developments in the global economy warrant doing so.

Whether the US Federal Reserve opts to follow up its recent 25 basis point rate cut with something more aggressive will be important to how the Bank of Canada sets its own rate going forward. With the US Federal Funds rate now essentially parallel to the Bank of Canada’s policy rate, a further cut by the Fed may place upward pressure on the Canadian loonie, which would exacerbate an already strained climate for exports and lower the outlook for Canadian economic growth.

Currently, the baseline outlook for the Canadian economy is not signaling the need for further stimulus. Core inflation is expected to trend at the Bank’s 2 percent target and growth is near potential. Moreover, policymakers remain weary of re-igniting a build-up in household debt, particularly after imposing policies designed to bring those debt burdens down.

We expect the Bank will, therefore, remain on hold as long as the Bank’s assessment of economic risk does not reach a tipping point. 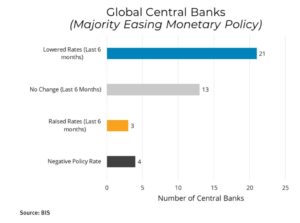